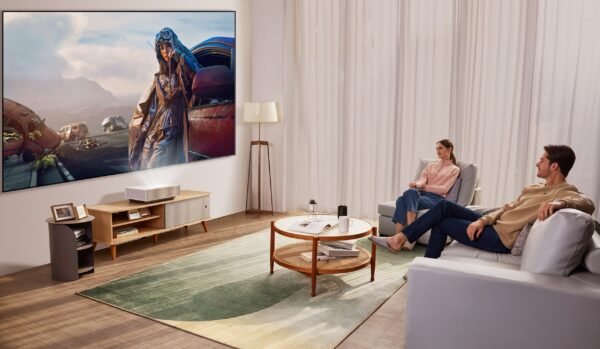 Since LG launched its previous model, HU715QW, it is still the successful projector currently dominating the market at below $3000.

It is now LG’s first single laser projector to have 4K resolution with HDR compatibility for an affordable price.

But does it deliver on its promise with a significant upgrade? Let’s find out this LG HU915QE with its advantages and disadvantages.

This new LG CineBeam model will challenge its counterpart, Samsung SP-LSP9TFAXZA, dominating the price range above $5000.

The model is designed in sleek and modern design, and according to my hundreds of projection testing, this is the cleanest ultra-short-throw projector out there right now.

The body is all white, but there is also a choice of black for those who don’t want to go with white.

On the front of the projector, there is no marking or anything written except the sensor for the remote control.

The setup took less than 5 minutes as I placed the projector on the table, and it was ready to use.

You can also mount it on the ceiling, as there are four mounting points to fix the projection system permanently.

We placed the HU915QE at a distance of 2.5 feet from the screen to get the image size of 120 inches. At the top, a small door opens up to adjust the zoom manually with the help of the focus ring.

The LG has kept a minimal connectivity option at the back of the projector there are three HDMI ports, two USB, power, optical digital audio output, an Ethernet LAN port, etc.

Also, it comes with a native 4k resolution and true resolving power of 8.3 million pixels or 4k pixel grids on the wall.

It covers the solid 90% DCI p3 color space that is way above the single laser RGB and below average compared to other triple lasers’ RGB true 4k projectors.

This model will work perfectly in ambient light conditions in your room even though the blinds are not on the windows due to its 2,000,000:1 dynamic contrast ratio.

With the LG brightness II optimizer feature, this projector automatically adjusts the brightness level according to lighting conditions present in the room.

Also, this model will have a hefty price tag, and still, there is no 3d support by LG, which I think is a bigger disadvantage for those viewers who like to view 3d content on a bigger screen.

According to sound quality, this model has an in-built 2.2 audio channels with a 40-watt soundbar which sounds good compared to LG’s previous model.

It is always recommended to connect external speakers to your projection system to a true cinematic experience in your room with the help of Bluetooth or optical audio output. 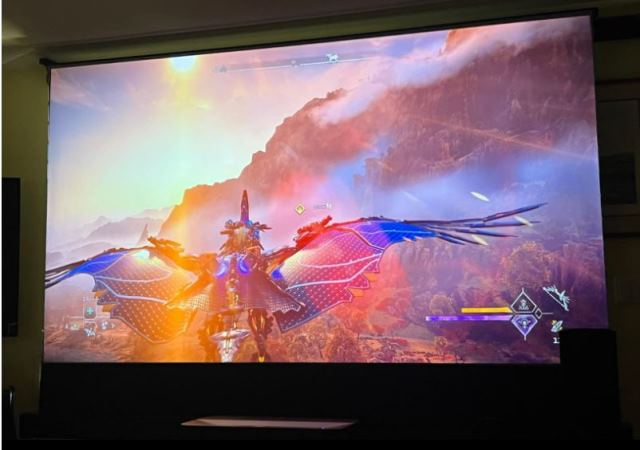 The whole projector is controlled by LG magic remote control system, which also has a google assistant voice control and Alexa voice assistant.

You can directly play Netflix, disney+, and Prime with a single touch from the remote control.

Also, Apple devices it has an Airplay feature to share or cast anything from apple device to screen.

Now the HU915QE runs on LG’s official operating system, where you can download hundreds of applications or games from their app store.

If you want a projector that does not require changing the projector’s setting and want a plug-and-play, then LG HU915QE can be a great option.

But you should know it does not have any 3d support, and you cannot play professional gaming.

I tried casual gaming, where the color combination was much more natural and detailed, with the least lag time on the screen.

Rest everything is excellent in contrast and brightness level, which will surely replace your TV. 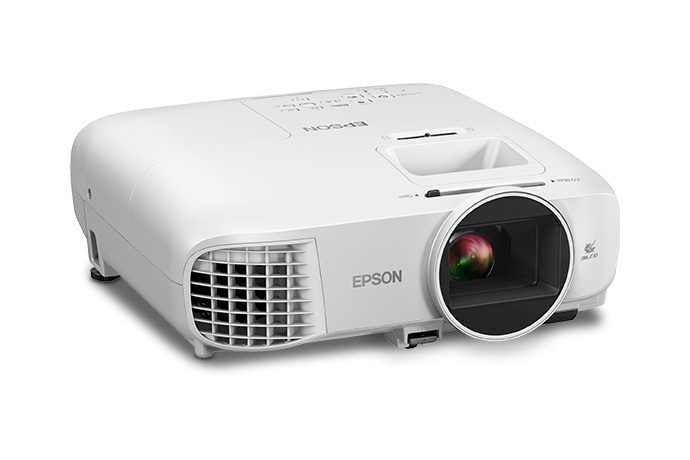 When looking for a projector specifically to make our room a cinematic experience, we think of spending quite a lot of money. But, due to recent… 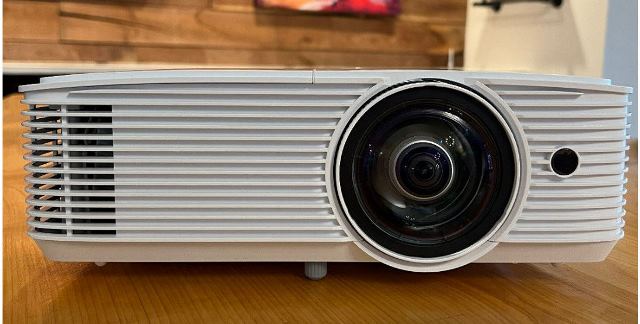 These days, having a reliable projector is becoming harder to select as many projectors are available in the market. Also, the price of full HD 1080p…

4k projectors are in demand due to their prices decreasing day to day, and also other brands are bringing 4k projectors from time to time with… 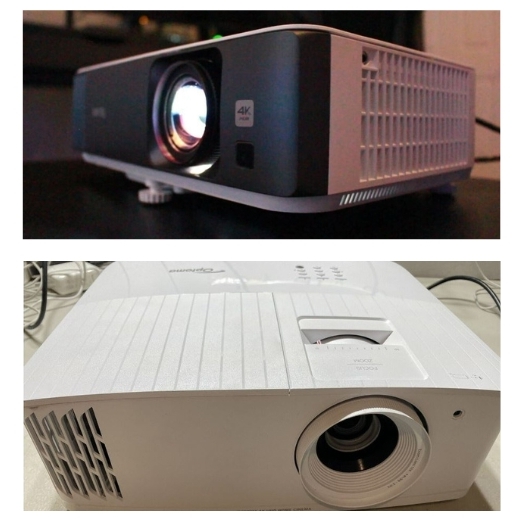 When selecting 4k projectors, there are hundreds of models available in the market, each with a higher contrast ratio, brightness, and other features. But there are…

Epson is one of the leading projector maker brands specializing in 4k and full HD 1080p resolution, which provides cost-effective products to its customers. So, if… 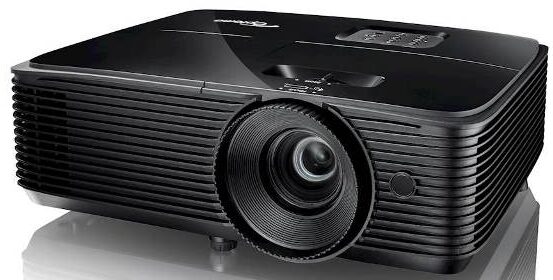 Projectors are made to project video, images, and slides on the bigger screens with the help of a powerful lamp that emits the light on the…